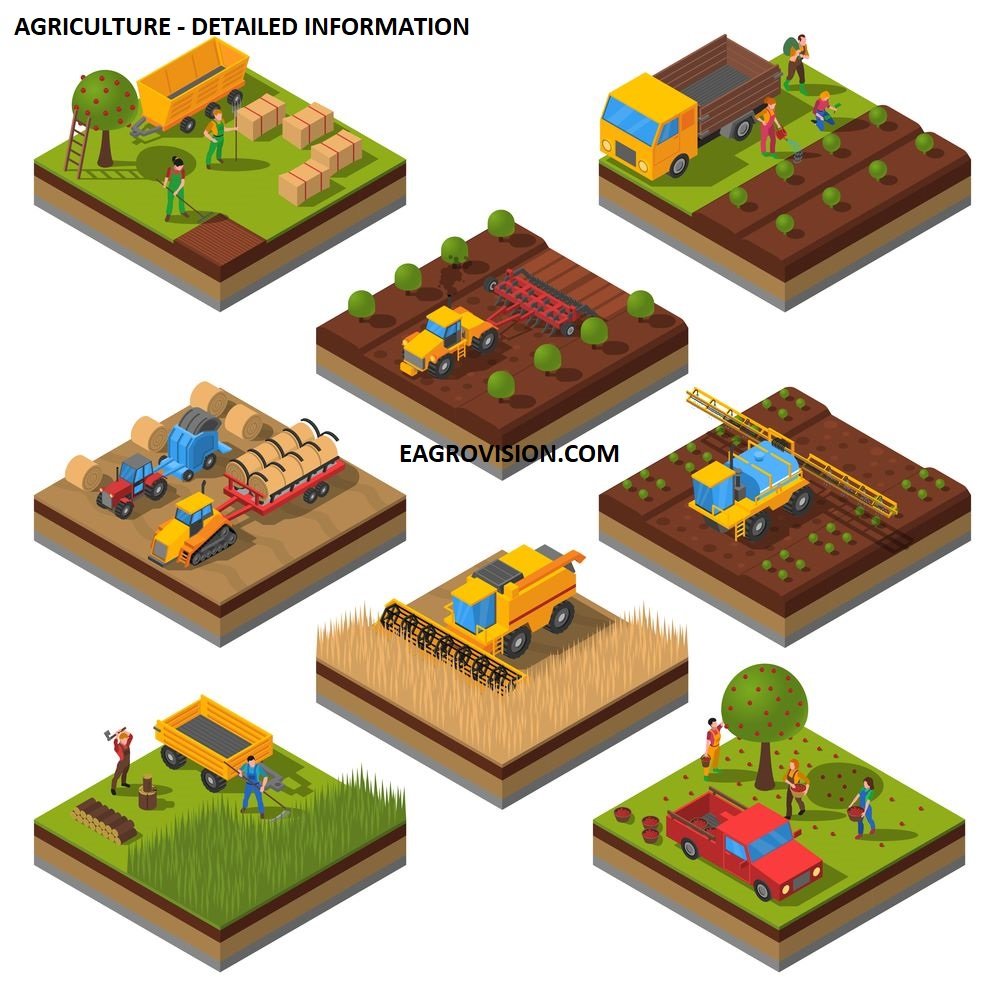 Agriculture is the backbone of human civilization. Agriculture consists of numerous farm-related activities. The history of agriculture dates back thousands of years in time.

Around the globe, agricultural developments largely depend on climates, cultures, and technology.

In the civilized world, industrial agriculture based on large scale monoculture is widely practiced. As for today, monoculture has become the dominant form of agriculture.

Over the years, advancements in the field of chemistry, physics, and botany have led to the rapid mechanization of agricultural activities. Thus resulting in increased agricultural output. This is possible with the help of modern and accurate practices in agriculture.

Deliberate modification of the earth’s surface for the cultivation of plants and rearing of animals and livestock is termed as agriculture.

Food production is the major purpose of agricultural activities. It includes rearing of animals, plants and other life forms for food, fiber, biofuel, and dairy products to sustain and enhance human life.

Agriculture is more than farming. Its primary purpose has always been to feed the population. The population of the world has crossed 7 billion. Therefore, we have to understand how to feed them. We also need to study how we have been able to do it successfully for the past 10 thousand years. Hence understanding the process is necessary.

Domestication of not only animals but also plants are the core subjects here. Therefore studying them is necessary to understand the basics of agriculture.

Humans before agriculture depended on hunting and gathering. As a result, this many times led to hunger and starvation. Primitive humans hunted and fished for animals. Also, they gathered plants bearing naturally growing food and moved on.

These nomad groups moved with their animals to different areas according to what was available at that time for survival.

Life was much simpler for them though there was a daily search for food.

Hunting and gathering activities needed very little time. As a result, ample time was available to socialize as compared to modern times.

Why is Agriculture Important?

About 10,000 years ago came this big change. Humans started to form their colonies to settle in one place. Geographers, anthropologists, and historians debate over what were the exact causes that led to this change.

Generally, they all agree that environmental and cultural factors led to this change. As the last ice age ended, we started seeing environmental changes.

There was a shift in available water resources. Humans started searching for a more stable and sustainable means to survive.

Then there was the cultural element. People started to adapt and practice cultural norms. They developed their own belief systems that led to the development of stable societies in one place.

Today we see that the hunting and gathering societies form a very small proportion of the world’s population (0.005%). These are just a few tribes on the outskirts of modern society. They avoid any contact with the rest of the population.

We see some of these groups and tribes in the most underdeveloped regions of the world such as Africa, South America, Andaman and Nicobar Islands and in the Amazons.

Every once in a while we hear or read stories of these groups from contacts or interactions between the modern societies and these hunting groups.

Agriculture practices vary on the basis of the natural landscape, environment, socio-economic status of farms, farm areas, and main crops.

Hands-on activity, animals trained to aid the production of food and fertilizers also play a major role in agriculture. Large scale capital and mechanization have come together to do massive industrialized farming. We have taken advanced steps that are incredibly productive, such as modified productive methods, genetically modified seeds, etc.

There are nearly 900 million acres of farmland just in the United States.

Agriculture in Different Parts of the World

With the invention of agriculture around 10,000 years ago, different types of crops were grown globally. This was largely influenced by the geography of the region and what would flourish in this region-specific climatic conditions. Also, it largely depended on what the product did for the actual diet of the people.

In Latin and Central America squash, berry, beans, potatoes were grown. Another important crop grown in this region was the maize. Maize is an early ancestor of corn.

The inclusion of such food in the diet of people was the primary factor that led to higher calorific intake and more heartier diets for the people.

When we move to Africa, we see the emergence of yams and some basic cereals grains such as rice and millets. When we move to South-west Asia we come across heartier cereal grains like wheat, beans, barley, oats, and rye.

The emergence of rice took place in China. Rice mainly has two types, wet and dry. The interesting thing is that rice and soybean crops that are grown in Minnesota, had their ancestorial roots in East Asia.

In south-east Asia, we see a little bit of difference in the variety of crops cultivated.

Here we have plants that yield vegetables and fruits. Seed agriculture is not practiced here on a wide scale. In fact, plantations here are rut based or tropical based.

Plantations widely done here are of mangoes, taros, and coconuts. Also, it largely depends on what the product did for the actual diet and what they meant for the advancement and development of different societies.

farming in India also played a major role in the world of agriculture.

As we have seen agricultural diversity across the globe, we also need to have a look at the various animals domesticated around the world.

Given the incredible variety in the animal kingdom, what is amazing is that there are only a few that can actually be domesticated.

Human societies have tried over time to domesticate animals, but only some could be used for food and agricultural activities.

Cows, sheep, goats, camels, buffalos, donkeys horses are a few animals that are being domesticated for agricultural activities. We see that the Middle- East and South-West Asia were the center of the domesticated animals.

Previously there were mainly two types of plant cultivation. First was vegetative planting and second was seed agriculture.

Vegetative planting is the reproduction by cloning from existing plants. It began in south-west Asia. Seed agriculture refers to the growing of plants through the intentional act of planting seeds. Most of the cereal crops are grown by the process of seed agriculture.

The First Agricultural Revolution, known as the Neolithic Revolution, is the transformation of human societies from gathering and hunting to farming related activities.

This transition happened across the world between 10,000 BC and 2000 BC. The very earliest known developments took place in the Middle East.

It marks time in history about 10,000 years ago, where human societies changed drastically. Agriculture allowed spare time to develop religions, belief systems, infrastructure for the overall development and much more.

Farming created a surplus of food that allowed people to explore other aspects of life. Thus, life was simple and secure.

More than 5,000 kinds of different apples are grown around the globe. The largest producer of apple is China, followed by the United States, Turkey, Iran, Italy, Russia and India.

Intensive use of resources in industrial agriculture has led to a rapid increase in the cost of production of agro products.

Nowadays, all developed nations have mechanized their agricultural practices by implementing automated irrigation systems and other agricultural machinery.

This has resulted in increased consumption of water, fossil fuels, and tropical resources.

Industrialization of agriculture and ever-increasing demand has increased the use of pesticides and fertilizers. Thus resulting in increased cost of production.

But at the same time have caused ecological damages. Negative health effects are also a major concern.

Selective breeding and modern practices in animal husbandry have increased the output of dairy products, but have raised the concern about animal welfare.

Steroids, antibiotics, and growth hormones have increased meat production. But have drastically reduced the nutritious values associated with them.

The impact of agricultural practices on global warming has not been fully understood. Hence we need to understand it.

Significant degradation of land and water resources have been observed in recent decades. of agricultural land to increase yield has degraded the quality of the soil.

Thus it has made soil devoid of the basic nutrients essential for the overall growth of plants. Mono-culture has drastically changed the chemical composition of soil for the worst.

According to the United Nation, one-third of the total food produced globally becomes useless during different stages of agriculture. Storage, handling, processing, transportation and distribution, all result in food wastage.

This leads to an overall increase in the cost of products. As a result, farming becomes costly.

4) Unwillingness to Adopt Farming as a Profession

Agriculture is a billion-dollar industry across the globe. Still, the new generation is finding it difficult to accept farming and other agriculture-related activities as a potent means of earning. Therefore agriculture as a profession is declining.

Converting farms to commercial land is hurting agriculture. Governments across the globe have failed to understand the importance of agricultural land.

The solution to feeding the ever-growing population is only possible in the agricultural sector. Proper inventory management is the need of the hour. Every year millions of tons of food becomes useless due to poor storage facilities.

In order to improve the agricultural systems across the globe and raise rural prosperity, we need to take appropriate steps. This is possible with the help of advanced technology and innovative farming techniques.

We need to build a geographic information system to ensure precise and reliable geological data. We have to ensure easy access to this data.

Use of satellites for surveying and mapping to get exact demographic data needs to be taken into consideration for precise agricultural practices.

Farm-related knowledge, animal-related expertise, and other technical inputs should be made available to the farmers at the appropriate time.

This move is necessary to optimize the process of agriculture. Thus the governments at the district and rural level need to run awareness campaigns.

This is necessary to ensure that farmers are aware of all government schemes. As a result, overall development is possible.

Use of Data Analytics, artificial intelligence, geographic-tagging, and satellite monitoring is a must to revolutionize the agricultural ecosystem.

At the stage of modifying seeds and plants genetically, we have to ensure their resistance to climate change. Thus ensuring sustainable development.

It is necessary to study the impact of agricultural practices on the environment to strike a balance between mankind and nature.

Lastly, we have to adopt sustainable methods of agriculture to ensure the survival of the human race.

If you have any questions or suggestions about our blog, feel free to comment or contact us.

How to Grow Sweet Potatoes in 6 Easy Steps

How to Grow and Care for Euphorbia in 3 Simple Steps

Last Updated on March 3, 2022 by Eagrovision